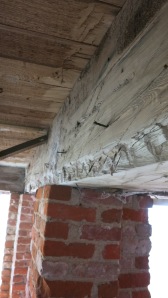 One of the structural characteristics of Point Houmas plantation that caught my eye during my visit a few months back was the massive hand-hewn cypress support beams that rested on top of the brick piers under the house. The beams were about 16″ on each side, as wide as the brick piers. You can see the original ax marks in one of the beams above, a testament to the age of the cypress and the house. As the old saying goes, “They just don’t make ’em like that anymore.” I’ve written about cypress and it’s relationship with vernacular Louisiana architecture before, but here’s a quick refresher on why it was such an important building material:

“Some cypress trees were over 160 feet tall and lived up to 3,000+ years. The odorless wood of bald cypress has long been valued for its water resistance, thus is called ‘wood eternal’. Still-usable prehistoric wood is often found in swamps. What makes cypress so rot resistant is an oil called cypressene located in the heartwood.  Old growth contains the highest concentration of cypressene. The heartwood is extremely rot and termite resistant. The heartwood contains a sesquiterpene called cypressene, which acts as a natural preservative. It takes decades for cypressene to accumulate in the wood, so lumber taken from old-growth trees is more rot resistant than that from second-growth trees.

Bald Cypress wood was the perfect construction material for south Louisiana for 3 reasons:

1) It was virtually rot resistant. If kept either wholly above or wholly below ground – if half in or half out, it will rot very quickly, however.

3) It was found in abundance.”

In fact, old growth bald cypress trees were so large prior to the 1920s and especially in antebelleum Louisiana, when they were felled, master-builders and slaves had to dig a trench under the main portion of the trunk in order to carve the tree into a suitable cypress. It was so much easier to carve the tree where it lay than try and haul it to another site.

Point Houmas plantation takes many of its architectural details from the traditional Creole cottage style: it’s raised several feet off the ground on piers; generous galleries set beneath its spreading roofline; one range of rooms paralleled by a front gallery; and of course, the use of hand-cut cypress as a building material. Given the size of the beams and the structure, Point Houmas is incredibly unique and distinct within the Creole architectural lineage.