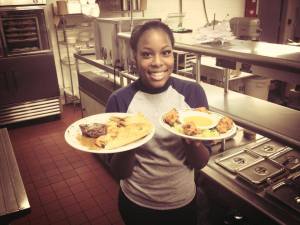 Bernadette’s Restaurant, a fine dining establishment on the grounds of The Cabin Restaurant, has menus that feature a fine dining Cajun/French fusion cuisine. Many of the dishes on Bernadette’s menu can be found in The Cabin Cook Book, which can be purchased at the The Cabin Restaurant or online at Amazon.com (the cook book also contains recipes from The Cabin Restaurant and the Coffee House).  Below is an excerpt from The Cabin Cook Book for New Orleans BBQ Shrimp. Shrimp play a large role in the dishes and diets of Gulf Coast residents. They are abundant in waters of the Gulf of Mexico, are easily prepared, and fit well in hundreds of dishes. The recipe is a New Orleans classic with a Bernadette’s twist. Recently, Chef Troy Mendoza at The Cabin also came out with an interesting twist on the recipe, serving the shrimp with a 4 oz. tenderloin and homemade garlic bread (see picture above):

A New Orleans favorite with a Bernadette’s Twist

Method
Mix all of the ingredients together to combine, except the shrimp

In a medium sauce pan, heat the sauce to a simmer

Remove from heat and serve on a plate with lemon wedges