I am continuing the trend that I started a few weeks ago in identifying the plantation woodcuts that hang on the walls of the garçonnière of The Cabin Restaurant. However, today’s post focuses on a woodcut in Bernadette’s Restaurant of Nottoway Plantation. Here’s a little history on Nottoway:

The Nottoway Plantation House, one of the largest antebellum plantation houses in the south, is composed of 64 rooms, 7 staircases, and 5 galleries. This 53,000-square foot plantation home, constructed by John Hampden Randolph in 1858, is a fine example of an antebellum home. Randolph, whose father had come from Virginia in 1820, purchased the area in 1841. In 1860 Nottoway Plantation encompassed 6,200 acres and Randolph, the builder and owner of the property during that time. Randolph had many designs submitted from various architects for his home, but he eventually settled on Henry Howard to design the mansion. The main house survived the Civil War. The Randolphs held onto the house through the Civil War and Reconstruction until 1889, when Mrs. Randolph sold the mansion following her husband’s death.

Nottoway sits about 200 feet behind the Mississippi River Levee surrounded by oaks, magnolias, pecan trees, and sweet olives. It is distinctive from many River Road plantations in that it was Italianate in style. Although many people think of Greek Revival architecture as the dominant form in antebellum Louisiana, that style was well on its way out by 1860 and Italianate had taken hold, especially in the mind and hands of Henry Howard. Nottoway’s thin Italianate pillars stretch vertically to touch all of its three levels, extending from the house’s one-story brick base to the paramount height of the third-story made of wooden frame. From the front gallery the Mississippi River is in view. The interior of Nottoway is white in color, including Corinthian columns, lace curtains, carved marble mantels and even the floor, creating an elegant environment.

Today, Nottoway serves many functions, including operating as a wedding and event facility, operating as a bed and breakfast (you get to stay in the mansion!), and offering daily tours. It is located on the west bank of the Mississippi River in White Castle, about 30 minutes from The Cabin Restaurant & Bernadette’s Restaurant.

A specialty at The Cabin Restaurant and also at Bernadette’s (still looking for an executive chef, btw!), Shrimp Scampi is an easy to prepare dish that is hearty in filling. If you’re close to the coast, like we are, it’s fairly easy to get fresh Gulf shrimp. If not, you’ll have to take your chances with frozen shrimp (sorry!).

Scampi is the name for a style of preparation typically for seafood, and is also used as a culinary name for some species of prawn. The “true” scampi are Norway lobsters which are found in the Adriatic and parts of the western Mediterranean.

Method
Bake the peeled and deveined shrimp in a 350° oven for 15 minutes; then set aside on a serving plate

Reduce the wine, lemon juice and paprika by half and pour it on top of the shrimp. At The Cabin, we also add artichoke hearts and mushrooms to this stop to be a little different. Experiment however you please!

Top that with the bread crumbs and Parmesan cheese and broil until the crust is light brown, serve hot. For extra Scampi Butter, follow the recipe below

Mix all ingredients together thoroughly

Use on any seafood such as Shrimp, Flounder or broiled Snapper

It’s been a great 2013 here in Burnside, Louisiana. I started this blog a year ago in the hopes of exposing the classic charm and history of The Cabin Restaurant, The Cajun Village, and Bernadette’s Restaurant to the rest of the world. Each of these three businesses, and our little community here in the heart of Louisiana’s historic Plantation Country, is something I treasure dearly. The rolling sugar cane fields that hem in the Mississippi, the stately antebellum plantation homes, the charming towns like Donaldsonville in Sorrento – these form a perfect setting for a rich, Cajun culture that has flourished in Ascension Parish for nearly 300 years. I am glad you have taken the time over the past year to read, follow, and fall in love with the community I call home. Here’s to a great 2013 and even better 2014! I can’t wait to share more Creole/Cajun dishes, more Cajun culture, and more Louisiana history with you over the next 12 months.

Ever since Chef Troy Mendoza has arrived at The Cabin Restaurant, the level of creative culinary expertise has risen to previously unforeseen heights. His weekly dinner specials never cease to amaze. Below is the recipe for one of his most recent creations: Grilled catfish topped with crabmeat, served with white asparagus and swimming in a white wine beurre blanc sauce. (Note: the beurre blanc sauce recipe can also be found from the Bernadette’s Restaurant section of The Cabin Cook Book). This simple yet elegant Creole-themed recipe is sure to satisfy your taste buds. If you’re every in the Burnside area, stop by The Cabin and try out the rest of Chef Troy’s original recipes in person!

Method
As mentioned in a previous post, most Southern servers prefer to fry their catﬁsh, and when they do, it’s in a vegetable oil. However, grilling is a lighter alternative.

The ﬁllet is seasoned and lightly coated with a butter ﬂavored oil and Cajun spices (Tony Chachere’s always works well). It is then grilled, turning once until it ﬂakes.

Since this method is usually served with a lighter side (such as steamed vegetables or a rice dish, as opposed to fried catfish and french fries), the healthy beurre blanc sauce and white asparagus will pair well with it.

In a small sauce pan melt 1/4 cup of sweet butter, on medium heat; then add 1 tbsp chopped shallots and cook until clear.

To this, add 1/4 cup of white wine, a dash of lemon juice, salt and pepper to taste and 2 oz. fresh cream.

Reduce the mixture until thickened to a sauce consistency

Plate grilled catfish filet first. Top with crabmeat and arrange white asparagus in demilune around the filet. Top with beurre blanc sauce and garnish with a fresh lemon wedge. 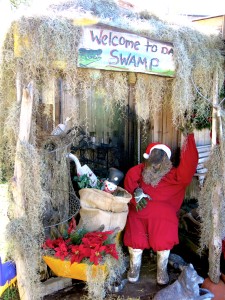 December has finally arrived here in Ascension Parish, and we have been busy decorating The Cabin Restaurant, Bernadette’s Restaurant, and The Cajun Village. All the stores in The Cajun Village have some kind of Christmas special or items to decorate your Christmas tree or house with. There are plenty of Christmas events in the River Parishes area, most notably the Festival of the Bonfires on the Levees.

So here’s a little photo gallery with some images of what Louisiana’s historic plantation country has to offer this Christmas, from gifts, to lights, to good Cajun food and traditions. Enjoy!

Christmas on the bayou!

The last of the sugarcane harvest across from The Cabin Restaurant

Garland and ribbons along The Cabin’s pieux fence

Santa in The Cabin

The Courtyard, decorated for the holidays

Wreaths at The Coffee House

The Cabin, decorated for the holidays

A Christmas Tree in The Cabin

The magnolia flower is made of redfish scales