When most people think of the South’s iconic historic buildings, they often picture antebellum plantation homes. There are a few reasons for this: they are large and grand; they are usually the only buildings preserved from the past in a particular geographic area; and the plantations emit a certain “Gone with the Wind” vibe – a romanticized version of the Old South that makes people swoon for days gone by. 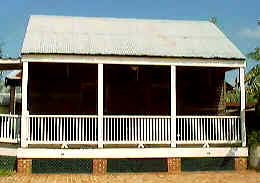 One of two slave cabins from Helvetia Plantation (circa 1850), saved and restored by Al Robert

Homes were built of local material, usually wood (cypress in Louisiana) cleared from the property owner’s land, and used to construct simple dwellings that were built functionality instead of style. In Louisiana, these buildings took the shape of Creole cottages, slave cabins, and shotgun houses. The greatest collection of these buildings lies in New Orleans today. However, there is still a sizable, although rapidly deteriorating, stockpile of vernacular buildings in the parishes that make up south Louisiana, especially in the River Parishes.

So why should we save these smaller, seemingly less important structures?Because they tell the story of a large swath of our cultural heritage. The families who built grand antebellum plantations represented the top 1% of society prior to 1860, which means that most of the United States’ 31.5 million citizens lived in less than idyllic conditions, in homes built for functionality. Our vernacular buildings are important precisely because they are ours – past familial generations invariably inhabited some kind of basic structure built in the local architectural style, rather than a stately mansion. Unfortunately, the commoners left little of themselves to be remembered, especially in writing. That is why it is important to preserve the buildings they lived in, because they may be the only lasting vestige of a people and a history long since vanished.

We don’t just preserve buildings because of their architectural style, building materials, or date of construction. We preserve them because of the people who have inhabited them, because of the people who constructed them, and because they provided one of the most basic human needs: shelter. Vernacular buildings sheltered most of the South for the first 250 years of its existence after colonization. Let’s give them their due and make sure we save them while we still can.